My plan, our plan, THE plan was that I would go back to work after our son was born. I took three months maternity leave and after two weeks of being back on the job, I got laid off. I worked for a software company at the time and all of the Project Managers were “let go.” Wow that was a lot to wrap my head around, now what??? I never intended to be a stay-at-home mom (SAHM).

Honestly, I was scared. Financially we could swing it (thank you husband) but mentally the idea of not working was completely foreign to me. I hadn’t considered it before, it wasn’t in the plan. This wasn’t a choice, it was an unexpected circumstance. I worked most of my life up to that point, from the time I was 16 until I got laid off at 35 and there were several years that I worked multiple jobs. Before I was legally old enough to work, I worked.  I raked leaves, shoveled snow, cleaned, weeded, babysat…I hustled.

I was raised by a single mom and we were broke. I worked because I needed to if I wanted anything beyond the absolute necessities. Through observation, I took in many lessons from my single mother. She always said things like “don’t become a secretary” and the not always verbal but always present and paramount life lesson – don’t depend on a man. Well damn, now I have a 3 month old baby and no J-O-B and a husband OK with me staying home.

The medical complications of my pregnancy and necessary follow up also had a profound effect on me. Part of me was just happy to be alive. I had to talk myself through the not working thing. I questioned myself, if this was my last day on earth, how would I want to spend it? Working some random job or taking care of my baby.Truth be told I did send out some resumes but it was a half-hearted attempt. I could not justify making a choice to work and leaving child care up to someone else a big chunk of the time, simply because I HAD a choice. It’s a different game entirely if it isn’t a choice, I get that.

It didn’t take long to see some hostility between SAHM and working moms…my theory is guilt. Only my theory based on my own experience not a universal truth so calm down…your theory may kick my theory’s ass at recess…I don’t really care.  I had guilt as a SAHM because I was used to being financially independent and I had to constantly tell myself it’s OK, it’s best for the family (and it was best for us).

It was still hard to shake the guilt because of the lessons my mom taught me growing up. I was falling short by depending on a man. I think working moms feel guilt because they don’t see their kids as much. It’s just a hard frickan’ job whether or not you work outside the home.

I had to step away from my practical, always working self and do something completely different from what I had carefully planned. Sorry atheists…but for me being a SAHM was an act of faith. You see at that time between the health issues, unexpected unemployment, moving and other changes…I really felt like the universe was telling me to stay home, so I did. Honestly it is not something I did gracefully. It was out of necessity and circumstances that were bigger than me.

A week or so after my son’s first birthday, I took a pregnancy test and it was positive. This was unexpected. After the complications of my first delivery, my husband and I were a little scared. We “planned” on having one child. We were wrong. So one and done became two and through with lots of monitoring of my high-risk pregnancy.

Knowing what to look out for in the second pregnancy was helpful but it didn’t alleviate all of my fears. There were weeks when my husband traveled internationally and it was just me and our son. My fear was that I would throw a blood clot which would incapacitate me and my son would be the only one around. It was not an irrational fear.

Late in my second pregnancy, we were having a New Year’s Day dinner at my mother and father in-laws house. My sister in-law and her family were there as well. My husband was joking about some minor health issue he had. I laughingly said something like – “Sure you get a man cold, meanwhile, I’m throwing blood clots like a pitcher in the Major Leagues” – something stupid and yet (cue the the creepy music) prophetic.

The next day I felt that familiar dull ache behind my knee and I called my OBGYN. This time she had me go directly to the Maternity Ward at the hospital and did the ultrasound there. Sure enough I had another blood clot behind my knee. This granted me a 5 day stay in the hospital with an IV of blood thinners and mandatory bed rest.

When I was released from the hospital, I had instructions to inject myself in the abdomen twice a day with a blood thinner. Say whaaaaat? Every twelve hours I had to psych myself up to jab a needle into my very pregnant belly. Dare I say, super cringey stuff. 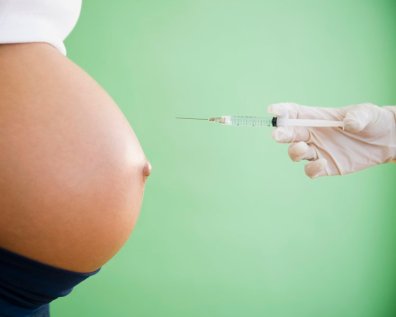 We decided to temporarily move back to New Jersey to be near the hospital and closer to family. I injected myself twice a day for a month before the Hematologist and the OBGYN got together and decided it was time to schedule a C-section. They were both afraid of a bad outcome (fatalities really mess with their malpractice insurance and I think they liked me). I had another retractable filter inserted. This time I demanded a mild sedative for the procedure, much better.

At 35 weeks/6 days of my second pregnancy our daughter was born via C-section. Me, my husband and our trusted doctors, all decided it was best to perform a tubal ligation after the C-section. Apparently I suck at being pregnant. I was 36 and survived two high-risk pregnancies. We had one healthy boy and one healthy girl, no need to get greedy.

Our second baby was so much easier. Perhaps because we knew the drill and our expectations were not as regimented so we could relax more. We knew we couldn’t “plan” every aspect of things so we just rolled with it. Bonus this baby wasn’t colicky and slept a reasonable amount from a very early age. (You mean they don’t all scream for several hours continuously and wake up 4 times a night…for years?)

Fast forward many years and I can see how being a SAHM served me. If I am honest, I got the perks and the liabilities in good measure. The perks are obvious, I haven’t missed a thing with my kids. First steps, first tooth, first haircut, first day of anything – I was there for all of it. We had so many special day trips that wouldn’t have been possible if I worked outside the home. They don’t remember most of them. I do, and I suspect they are the days I will reflect on in old age.

When I walk into my kids school, I know half the faculty, the school board and at least 60% of the kids by name.  I have created a network of go-to moms that can get me through to the finish line or at least high school graduation. I have volunteered for just about everything in the district (exception: I refused to get on the school board, that is just bat sh*t crazy).

The liabilities are pretty stacked too thankfully some of them have passed.  My first born was a colicky baby who had night terrors and did not sleep through the night for FOUR years (4 mofo years). My kids are about 20 months apart and (aside from my hospital stays) I got up with both of them every single time. Every. Single. Time. During those years I fantasized about being alone with a fist full of Tylenol PM in a dark quiet hotel room. Sleep was like trying to catch vapor in those early years of motherhood.

Being a SAHM was great but I had no time to myself. I thought it would be good to get away from the littles few hours a day, I couldn’t. I looked forward to medical appointments to get some “me time.” Some days it was easier to have the blood drawn than to be home. And sometimes I had to take two kids with me to those appointments. When they were toddlers I would play hide and seek just to get a few minutes to myself in the kitchen pantry (there may have been Oreos in there). 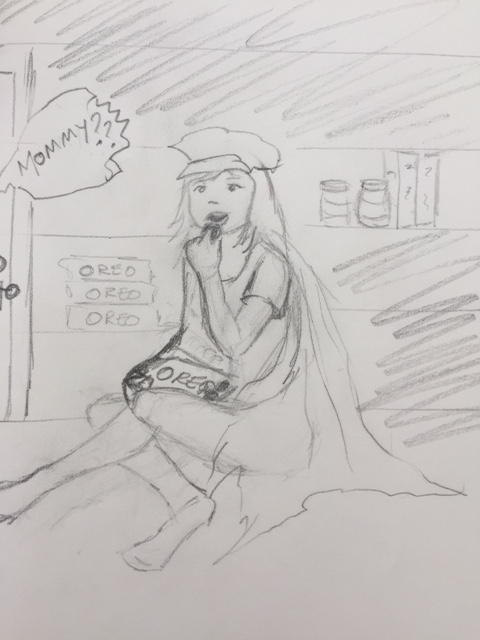 Being out of the workforce for a decade didn’t do me any favors career-wise. This may be the biggest hit that a SAHM takes. That and the guilt about doing anything for yourself because you get to stay home. What saved my ass was a small group of women in a Moms Club. Unlike me, they “planned” to be SAHM and their friendships have had a huge impact on me.