I don’t think there has ever been a better time to be a domesticated dog. Blanche is loving the quarantine life and I feel less guilty taking a walk with my four-legged hall pass. When I get the mail at our PO box I bring Blanche to take her around the nearby shopping village.

This place is usually a hive of activity. They hold seasonal festivals throughout the year, typically with a food theme – strawberry, blueberry, beer. In mid November they flip the switch and the outdoor space transforms into a sparkling Holiday Wonderland. It really is breathtaking. Right now the tulips are in bloom and it’s a welcome distraction from otherwise dreary days. Lately, even the weather is depressed, overcast, cloudy, the sky cries a lot these days.

Blanche doesn’t know why she gets so many walks now, why her humans are home all the time and I don’t think she gives the “why” much contemplation. She simply soaks in the affection, the extra attention, the constant togetherness and the abundant treats. I may be a little envious of her simplicity at the moment.

That’s not the only spark of jealousy though, Blanche got a spa day a few weeks ago. For some reason, it’s legal for her to get groomed. The place where she goes sells pet food so maybe they found a loophole? I didn’t dig too deep. My girl was shedding like it’s her job, ticks are hard to find on a furry black dog and honestly her beard was out of control. Yes you read the right, my lady dog grows a beard…I blame it on the Bouvier. My mutt is a Labradoodle mixed with a Bouvier. 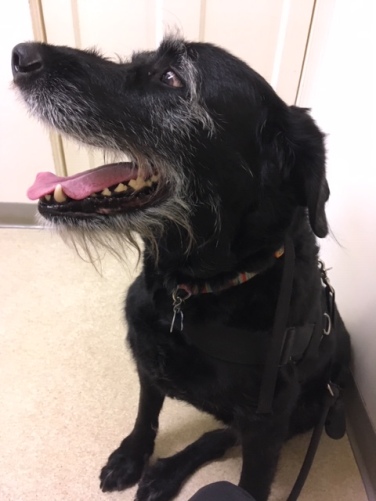 Poor baby is terrified at the vet. That beard though…

Now let me stop you before you start with questions like – Who, What, Why & Where – I don’t know. We adopted Blanche from Brookline Lab Rescue when she was about 18 months old. She and her brother lived with a wonderful family that had to re-home the dogs because a member of their family became gravely ill. They were good people going through a tremendously difficult time and needed to simplify their lives. Blanche’s brother went to an equally loving home so it worked out well for the dogs.

Anyhow, Blanche got her much needed grooming day….meanwhile, I look like an extra from the Walking Dead. To add insult to injury, there was an incident last week.

This is me looking for pizza…kidding, I wish I was that skinny.

We have been ordering take out from our favorite restaurant at least once a week since this mess started. I have a teenage son with a significant chicken parm addiction and we all like the Brooklyn pizza. The Brooklyn pizza is a large, thin crust, square shaped pizza with 12 slices. Because biology is a sadistic MF to midlife women, I eat one slice once a week and hope to not gain 3 pounds. Everyone else in the house can eat multiple slices and maintain a sleek build (grrrr…Science).

Last week I heard my husband in the kitchen, I was in an adjacent room. I was within ear shot but couldn’t see him.

Hubs: What happened to the pizza?

Me: (I walk into the kitchen) What do you mean?

Hubs: There are only 3 slices left?

Me: I had one and so did she (pointing to our daughter).

Within minutes we confirm that our son has not eaten seven slices of pizza which, let’s face it, is entirely possible. It was Blanche! That bitch went ninja on us and silently stole SEVEN slices of pizza. The real shock was the only tell tale (tail?) sign was that the wax paper had shifted inside the box….somehow and this is the amazing part, she managed to close the pizza box lid. I sh*t you not.

I’m equal parts annoyed and amazed by her abilities. The real rub though…she can eat seven slices of pizza and still have a bikini ready body. And yet again, I wish I could draw because, Blanche wearing a bikini…sigh. 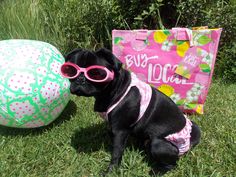 Thank you Internet for this random photo of a pug wearing a bikini. It’ll have to do.