Hey friends, it’s been a hot minute since I’ve written. I’m sorry I’ve been so absent, I’ve started and stopped writing about a dozen times in the past two months. I tend to go in when things gets rough…deploy the shield and turn into a three-banded armadillo, tuck and roll. Yup, that’s what I do. 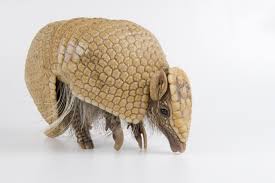 Rob passed away in May. It was just a couple of days after his 96th birthday. In early May, Rob went to the hospital for an issue and it was discovered he had Co-vid. Due to the virus he could not get the necessary treatment, it was indeed a death sentence. His family fought like hell for 10 days to get him home so he could die there instead of alone at the hospital. I don’t know how many strings his son had to pull to make that happen. I’m guessing that the family contribution of 50+ years of community service helped get that monumental task completed.

The day he came home I was dropping off groceries for the family. I volunteered to do their grocery shopping because I wanted to limit their exposure. It was the day before Rob’s 96th birthday. I am grateful he was able to die at home with a handful of loved ones at his bed and many more tuned in remotely for a final round of camp fire songs and cherished memories relived out loud.

Rob, like many that have died of the virus, deserves a big celebration. His life was full of community service, education, love, tolerance, patience, an abundance of birds and laughter. Sadly that celebration is on hold until it is safe to gather in a large group. My only regret is that I didn’t ask him to appear to me in the after-life as a flamingo. He would make an outstanding flamingo. 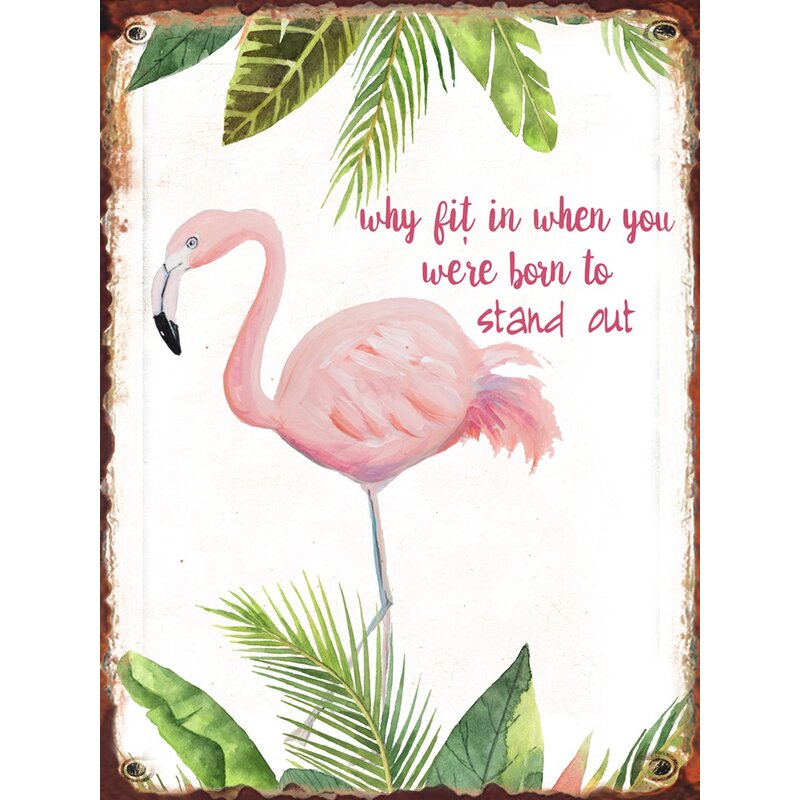 A three-banded armadillo and a flamingo walk into a bar….kidding, bars are closed silly. Wear a mask, wash your hands, be kind and if you can’t be kind, be quiet.

I think I have a team of angels around me. Many are the clients I have met since starting my business a handful of years ago. The business is set up as a concierge, more times than not, I work with elderly clients. I’m usually brought in by the adult children who worry about their parents safety or want to improve their quality of life. I never know what I’m walking into until the situation reveals itself. Before I can blink I’m attached to my new friends.

Many of my clients are sick and/or elderly and we typically part ways when they die or move to a nursing home. That’s the hard part. I saw a blue bird this morning and was reminded of a dear client.

Clara, she comes as a blue bird per my request. I didn’t want a cardinal because well, that’s been overplayed. Clara was the mother of an acquaintance of mine. The business was fairly new when she reached out several years ago and asked me to meet her parents. We have since become close friends.

I felt an instant pull toward Clara and honestly I would have visited her for free. If she turned down my services, I would have wept. She had a soul that pulsated love and good energy. I’ve only met a few people like her in my life and I was desperate to be around her. She and her husband lived on a small farm and she was pretty sick when I started. Within a week I suggested that she transition to hospice to be as comfortable as possible.

It was an interesting work environment. I did a lot of laundry and light house keeping which is typical. I also washed outdoor furniture and helped prep for meals and social events. I made my first quiche ever for Clara because she was hosting a breakfast. I’ve since made many and they are super easy and quite impressive. Clara had a way of getting you to do things slightly outside of your comfort zone and then you felt a little bit of pride for the successful stretch.

One of the most memorable days was helping Clara shower before she transitioned to Hospice and got a Home Health Aide. It’s not something I typically do but she was uncomfortable and I would have done just about anything for her. She lost what was left of her hair in that shower. It upset her husband, she was relieved.

Clara moved to America from China as a teenager. From what I can remember she taught herself English over a single summer. She and her husband met at a private prestigious high school. She went on to become a nurse and eventually worked at that school. She was intelligent, kind and just being in her presence made you a better person. She had a life rich with experiences, family, profound friendships, service, world travel and she hosted many delicious meals. Thank you blue bird for the visit this morning.

Hello internet friends. For those that are following my blog, thought I’d update you on some things. It’s riveting so grab a hold of your hats and hold on (I may have just oversold it):

Remember how I wrote about my friend Pam a few days ago…well today I went to an appointment and to my surprise, three of her friends were there. We all shared Pam stories, held hands and sang a song. OK there was no actual singing I just find it interesting that she is reminding us all of her fabulousness. Damn, I miss her.

After that, I stopped by my friend’s bakery. She’s magic and makes the most delicious knishes. I came home with two boxes of goodies and when I took a peek I saw that my friend added some extras (she basically doubled everything). Did I mention that I have the best friends. When I got home I saw this meme. I’m totally fine with having a pet sloth named Knish:

This week my client Laura told me about polar bear picnics. When her kids were little and driving her crazy inside during the winter months she would send them outside with instructions. They were given some sticks and a can of soup. They were expected to make fire, heat the soup over an open flame and eat outside. This woman’s bad ass level impresses me to no end. I also found out she used to ride her bike to work – 5 miles of country back roads with no shortage of steep hills. On the way home she would stop to look at wildflowers. I think she was just trying to get out of cooking dinner and again, she has my respect. Now I can’t get the image of little kids bundled up in 60’s winter gear over a driveway campfire with a polar bear. If only I could draw…

The above picture was downloaded from my Facebook newsfeed. This woman is 100 today and I instantly fell in love with her. Notice the banner in the background – “I’m 100 Bitches”. Other photos included toilet paper encased in a box that read “Holy crap, I’m 100!” and a mug that stated “It took 100 years to look this good!”

These are my people.

My regular readers may recall that my father died this past September. We had a complicated relationship and I was mostly on the losing end of that situation. We’ve gone from childhood abandonment – to awkward random sightings – to being able to socialize and converse about superficial stuff. We weren’t close, we weren’t estranged, we were in some weird limbo state that we were never able to breakthrough.

Everyone goes through emotions when their parents die, even if you aren’t close. I didn’t know what to expect in this situation. My father in-law whom I adored died this past May, that was heartbreaking. I miss him every day, I carry that with me daily. With my own father it was different, like our history, it was complicated. I didn’t know how to “unpack” this complex variety of emotions. I even went to see a Medium about it, I wasn’t impressed.

So now I refer to my father as “Ghost Dad” and we chat. Mostly I chat, he’s a pretty good listener. The Medium I saw said I could ask him questions (simple yes or no questions) and if the answer was yes I would be granted a yellow rose of some sort. Well that sounded like some basic bullsh*t to me. Our relationship wasn’t generic it was a kaleidoscope of dysfunction, not something a yellow rose could handle. I came up with my own sign and I told Ghost Dad about it several times, dozens of times. I wanted, no demanded, a unicorn on a unicycle farting rainbows.

Pretty outrageous sure, but the guy owed me. Here are the links to digital bits of my soul that I have thrown out to the universe in an effort to exorcise the demons:

I’ll Buy My Own Flowers

Anyhow, if you actually clicked on the links and read through that mess, apologies. I know it’s awful and maybe it made you cry…I want you to know that I’m doing well. On Christmas, I got a present from a good friend who did not know about the very specific sign. Here’s a picture: 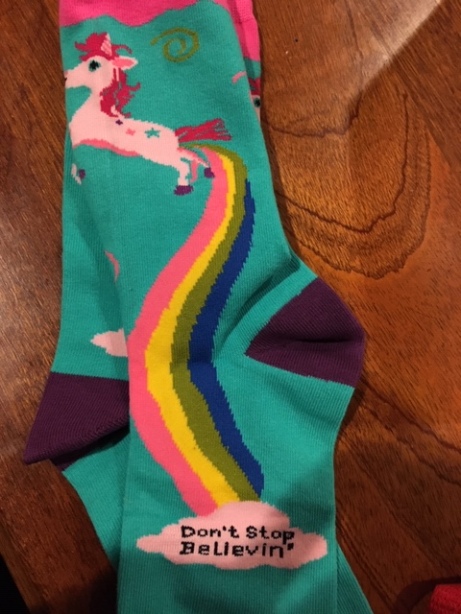 Socks which feature a unicorn farting rainbows with “Don’t Stop Believin'” on them. Sure there isn’t a unicycle but I’m still taking it as a sign from Ghost Dad. He heard my expletive laden rants and he has repented in his own way. Today I choose forgiveness.

I have felt so much lighter since I received these socks. So much so that I told the practical side of my brain to sit this one out, Don’t Stop Believin’!

*The featured photo is of a mug that my outstanding friend Katie gifted me. I’m pretty sure she knew about the unicorn sign thing, she just gets me. Thanks Katie!