If you are a regular reader of the blog (all six of you), you may recall that I named my inner critic Ethel. I’m pretty sure we all have an inner critic, that asshole in your head that makes you second guess your life choices. Sure sometimes they make a valid point, for instance, meth is always a bad idea. Other times it’s less obvious like beating yourself up over that new bold haircut (psst…they rarely go well) or that second slice of chocolate cake.

I visualize my inner critic as an elderly prairie dog named Ethel. Ethel has bifocal glasses that lean so far down her snout they are in danger of falling off her face. She wears hand crocheted sweater vests in terrible color combinations like orange and fuchsia with a splash of brown. Her right hand is on her right hip in that universal condescending stance. Her nose is scrunched in judgement and as a means to keep those glasses from sliding off her sour face. Oh and she’s fat but we don’t discuss that because fat shaming is wrong. She wears sensible brown shoes (to match the vest) and she has a broken pen behind her left ear. That pen hasn’t worked since 1992. Anyway, this post is about a different Ethel, but wasn’t that a fun distraction.

A nude shot of Ethel. You have to imagine the ugly sweater vest, bifocals, brown orthopedic shoes and broken pen.

Last night I stayed with an almost 92 year old lady named Ethel who prefers to be called Jane (keep UP). Her son in-law recently passed away and the family was at his wake. Ethel, I mean Jane, is one of those fun feisty nonagenarians. I didn’t have to do much except bring her food and follow her cues as to how social she wanted to be.

She’s fiercely independent and very lucid with the occasional lapse of judgement. At one point she wanted to ask her daughter about how the Thanksgiving turkey was cooked…not a great idea to call during a wake. I tried to distract her but her will won out and then she felt bad. I assured her it was fine, that the phone was likely on silent and I got the answer via text. In case you’re wondering, the bird was cooked for 14 hours at 200 degrees Fahrenheit, it felt wrong to ask for more details than that.

Jane gets a glass of wine promptly at 7pm, Chianti if you’re curious. After the vino my new friend started spilling family secrets. It’s amazing how much one glass of Chianti can yield, perhaps governments need to change their tactics when dealing with hostile prisoners. We’d probably get further along than we do with water boarding…but that’s an entirely different kind of post.

I will keep the family secrets in the vault but I can share one amusing tale. Jane was in Ireland on vacation with her daughter in-law (Debbie) and a friend (Ann). They were on their way to Trinity College in Dublin to see The Book of Kells exhibition.

For those that don’t know (including myself until 5 minutes ago) The Book of Kells was created around the year 800 and contains the four gospels. The emphasis of the book is on the 340 folios made from calfskin vellum. The book is primarily visual as much of the text is either truncated or erroneously repetitive. So it’s basically a fancy biblical picture book y’all! Here’s a link in case you find yourself in Dublin – The Book of Kells

On this particular trip, Jane discovered a deep dark secret about her friend Ann. Ann was (in the CIA – that’s Catholic Irish American, not the other CIA) a closet smoker. Jane caught her smoking a few times and pretended not to notice (much like I pretend not to see people I know at the grocery store).

Years earlier her other travel companion, Debbie, lost an arm to cancer. She had a prosthetic arm but it was too heavy so she usually went without it. The three of them were walking in a spread out single file line on their way to the exhibition. Debbie, the youngest, was far ahead. My new friend Jane was in the middle and Ann, the closet smoker with undiagnosed emphysema, was the caboose.

Jane: Ann if you don’t slow down….so help me God I will rip off your good arm and beat you over the head with it! Miss smokes-a-lot can’t keep up!!!

One of the ports on our 11 day Baltic Sea Cruise was Saint Petersburg, Russia. To be honest, it was never on my travel bucket list, I didn’t know much about it. We booked the trip last minute so I could see my niece and her boyfriend preform on the ship. They both got jobs as entertainers and this cruise was one of the itineraries during their 9 month contract. I started digging in a bit and somehow convinced my husband to send our daughter and me.

To prepare for this port I watched The Last Czars series on Netflix. It was really well done and fairly accurate according to people who know more about Russian History than me (nearly everyone). Saint Petersburg featured prominently in the series as it was the capitol of the Russian Empire from 1712 – 1918. Nicholas II was the last Czar of the Russian Empire, he ruled from November of 1894 until he abdicated the throne on March 15, 1917. Spoiler – he was a shitty Czar. Whether that was due to malice, ignorance or ineptitude is up to debate, perhaps a toxic mix of all three. If you plan to visit or just need something to binge watch, I recommend the series (Netflix feel free to send me something for the plug).

With my newfound interest, I decided to book a tour during our two day stop in Saint Petersburg. After stalking cruise experts online and reading dozens of reviews, I went with the Grand Group Tour with Alla Tours. The group sizes were much smaller than the ship excursions and the prices were better with similar itineraries.

The morning we arrived in Russia I was a bit nervous. I grew up during the Cold War, Russia was enemy #1 for a big chunk of my youth and let’s face it, they get bad press on the regular – land grabs, election rigging, poisonings, scary stuff. So I open the curtain to my cabin balcony and THIS greets me –

Russia is that a missel or are you just happy to see me?

That was a bit intimidating…according to our guide, Roman, it is an 87 story sky scrapper (not a scraper, a scrapper) which is owned by a petroleum company. Oh and Roman said it looked like a corn husk. Roman also said the Crimea land grab was fake news so draw your own conclusions.

Our first stop was the Palace Square which features the Alexander Column, the Winter Palace and the General Staff Building. It was gorgeous and we got a clear morning which is rare as SP only averages 60 sunny days a year. 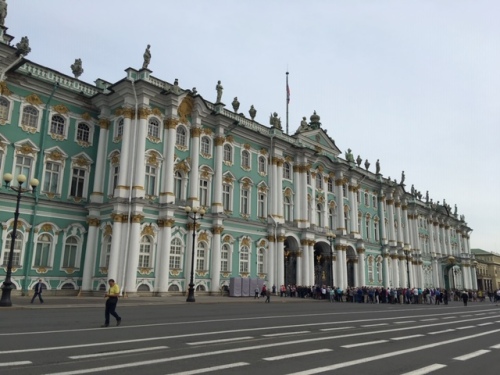 Winter Palace completed in 1762 was the first building constructed in the square and became the primary residence of Russian Czars. While visiting the Palace Square we ducked into a souvenir shop which, immediately offered Russian wine and vodka to all the customers, it was 8am (slurs speech, it’s 5pm somewhere Ruskii). My daughter tried on those big furry Russian hats, eyed the Faberge eggs and ultimately fell in love with this Russian nesting doll – 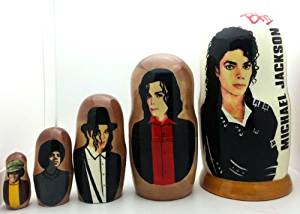 I didn’t buy it at the time because $45 seemed outrageous. Then when we got home I found it on Amazon so, someone will get this at Christmas….shhhh.

The Hermitage (1764) was our next stop, the place is infested with gold and precious works of art. We had the good fortune to see works by da Vinci, Michelangelo, Rembrandt and countless other artists at a mind numbing pace. 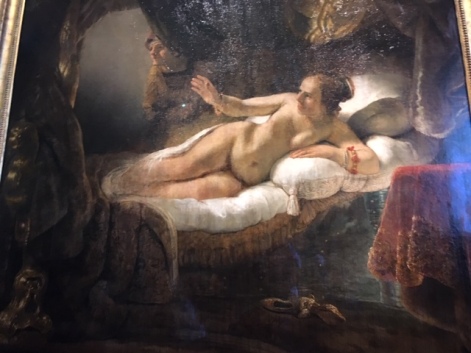 Danae, Rembrandt (1636 w/later revisions). This painting was seriously damaged in 1985 when some jackass threw acid on it. Extensive restoration and repair were done with some of the damage left intact so as not to entirely redo the painting.

After a couple of hours, my daughter was going numb from the barrage of information so she started to amuse herself by photo-shopping Michael Jackson’s head on famous works of art. I thought it was genius.

After the Hermitage we went to a restaurant for lunch which consisted of Borscht and Chicken Kiev. I enjoyed it, DD is not a fan of beet soup but she tried it and the chicken was better received. We were given pastries with a cream inside as dessert, yum. Next stop was the Peter & Paul Fortress and Cathedral.

The Cathedral featured the remains of the Romanov Family, including Nicholas II the last Czar. Their bodies were not interned until 1998 with the exception of Prince Alexei (born as heir to the Czar) and Princess Maria. The remains suspected to be of Alexei and Maria were not discovered until 2007. These bone fragments have since been tested and identified as the missing Romanovs though the Orthodox Church has not yet interned them with the rest of their family. The entire family was murdered in July of 1918 after being held captive by the Red Army in the city of Yekaterinburg (pssst…watch the series, you will not be bored).

We finished the day with a trip to Catherine’s Palace in Pushkin. It was exhausting, crowded and monotonous – gold, mirrors, chandeliers, hall, followed by more gold, priceless antiques, rare works of art and yes, more gold. Keep in mind this Palace, along with the other cites we visited had extensive renovations after being devastated in World War II. I kept thinking of the people that went hungry while all this gold was being brushed on for the renovation.  Here’s the backyard – 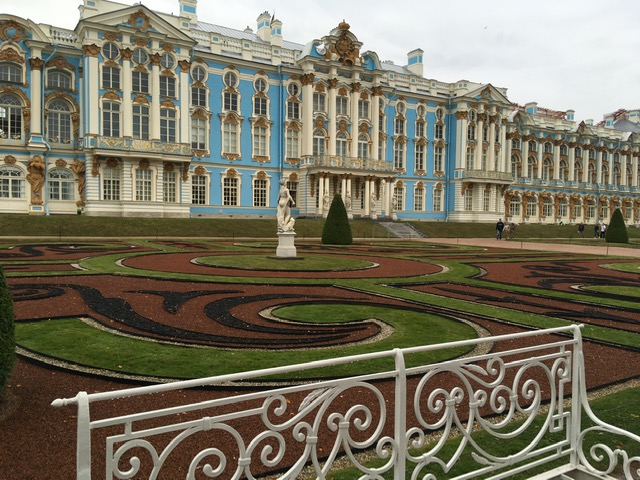 …and more gold for the road, stay tuned for the rest of St Petersburgh! 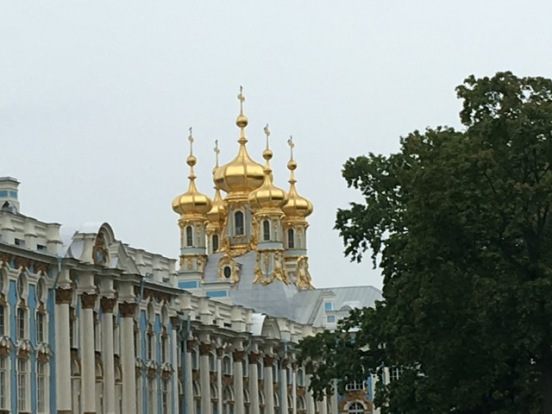