On our third day we were determined to get up early and see some more sites. We left Ben in charge and he did not disappoint. We stumbled onto a lovely beach at St. Margaret’s Bay which was surrounded by the white cliffs of Dover. 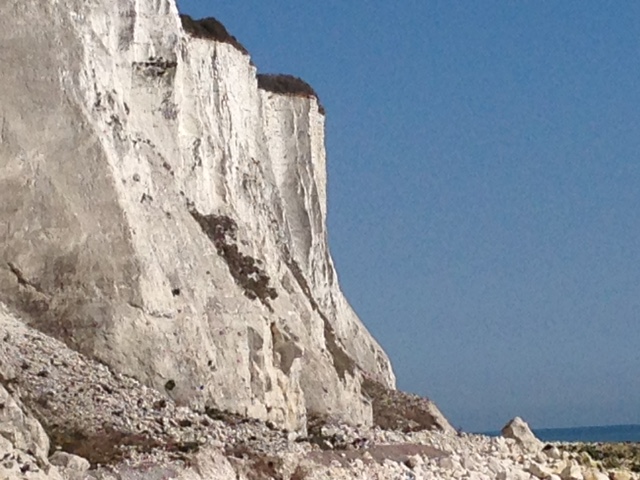 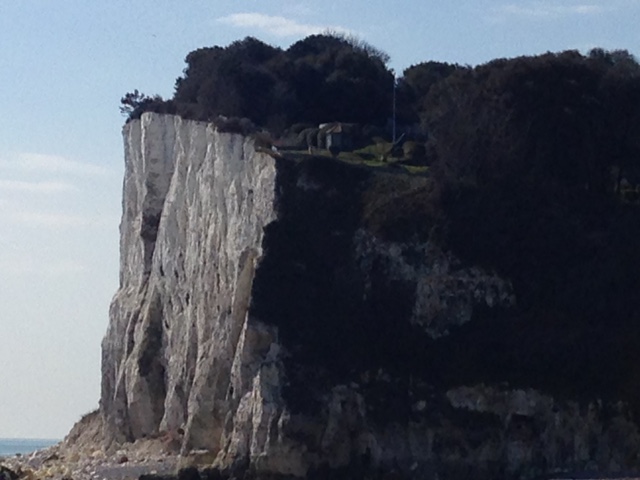 We had a small snack at the beach from a stand which was carefully attended to by a agreeable chap named Geeves (totally made up name). Geeves was wearing a tie to flip burgers and make coffee.  This would not happen in the USA. Sure you may get a charmer but a tie, not likely. The food was good, reasonably priced and the whole scene was refreshing. 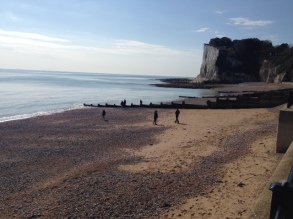 The beach at St. Margaret’s Bay

After about an hour we were back on the road, this time to Canterbury. It was a little tricky finding a parking place but we persevered and eventually found a spot. Canterbury was charming. It had a gorgeous cathedral and a lively town atmosphere among cobblestone walkways. 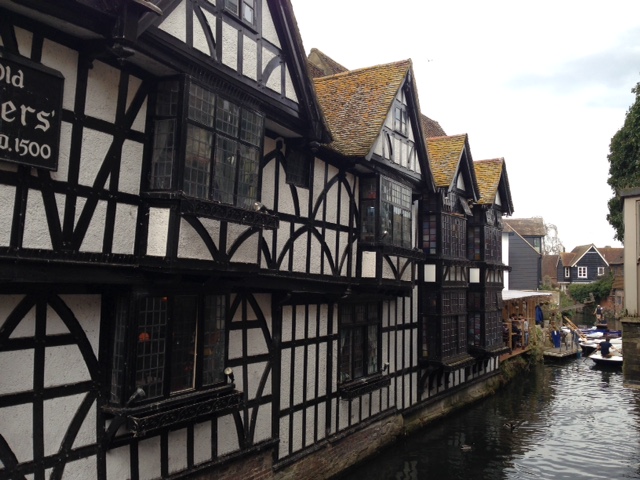 There is a ducking stool perched above the boats in the background of this photo. The ducking stool served as punishment for ‘scolds” (women who dissatisfied their husbands or gossiped. Uh-oh). It was also used to determine if someone was a witch. The suspect would be fastened to the chair and dunked in the river for several minutes. If they died they were deemed a non-witch and a letter clearing their name would be sent (Who doesn’t love getting a hand written note in the mail. It’s always bills, bills, bills oh look, Auntie Mary wasn’t a witch. Damn now I feel bad for missing her funeral). Those with the misfortune to live were considered witches and likely died in another heinous manner such as burning.

We wandered around the town darting into different shops and sites along the way. I’m not a big shopper but I couldn’t resist this – 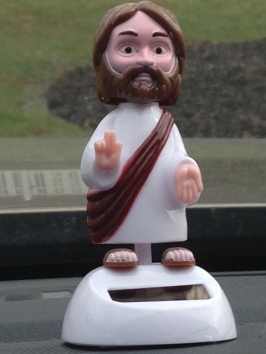 We did spend some time in the Cathedral of Canterbury. A curious person could spend six months in there. The new section is circa 1200, the new section. 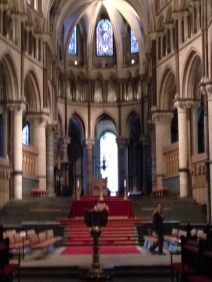 The “new” section at Canterbury Cathedral.

Thomas Becket gets a lot of attention in these parts. He was the Archbishop of Canterbury from 1162 until 1170 when *spoiler alert* he was brutally murdered in the cathedral. Things turned sour between Archbishop Becket and King Henry II over power. The King wanted more power over the church and Becket was opposed.

Four knights turned up in Canterbury to take Becket as a prisoner. The Archbishop sought solace in the cathedral and the knights went in after him. Soon after four knights emerged with bits of Becket’s brain on their swords, a gruesome killing.

Here is a great recount of the relationship between King Henry II and Thomas Becket. It’s somewhat tricky to determine who the bad guy is but Becket was canonized in 1173 and is considered a martyr. It does seem that Thomas Becket underwent an incredible personal change once he became Archbishop of Canterbury. You can get into the weeds about it here –

The cathedral itself is amazing so if you find yourself in that part of the world, I highly recommend a visit. 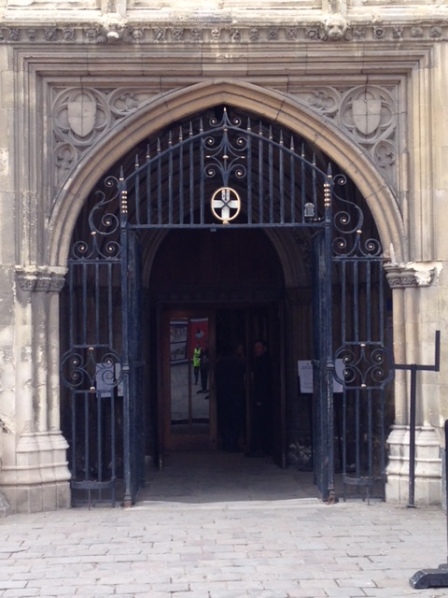 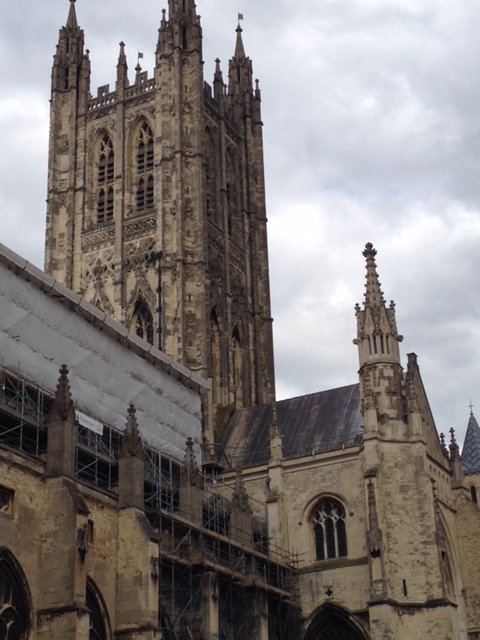 Half of England was getting a face lift while we were there. Stone is gorgeous but the upkeep, oh my. Canterbury Cathedral.

We made our way back to our last night in Rye. Our cuisine for the evening was local fish & chips from Marino’s Fish Bar. American friends, chips here are french fries and our chips are called crisps, either way a potato or two get sacrificed.

The first three nights of our 6 night stay had us tucked in at a cozy apartment in Rye, England. There were 6 in our party – a family of four and a married couple. Our tour guide, Ben, was born and spent his first decade in Great Britain so he was well versed. He and his wife, Sheila, have probably visited England 10 times in as many years.

We stopped at Windsor Castle on our drive over and got to Rye around 6pm. We had a quick stop at a market and stocked up on some supplies. We got the usual – milk, eggs, bacon, bread, water and Mr. Kipling French Fancies. Sadly, I did not partake in the French Fancies because I foolishly gave up sugar for Lent. I had less than a week to go to make good on that decision and I was determined. This meant no scones or desserts of any kind. Boo, hiss.

Our friends made a reservation for dinner at one of the coolest places I’ve ever eaten – The Mermaid Inn in Rye. This place has been around since 1156 (cellars) they hit the reset button in 1420. It’s entirely possible that Shakespeare himself visited in August of 1597. The only glimpse I got of William was this bust they have of him. 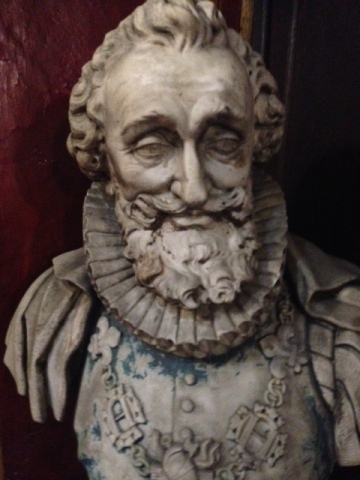 I took a picture of the outside, it was dark and my son photo-bombed me and I may or may not suck at taking pictures. 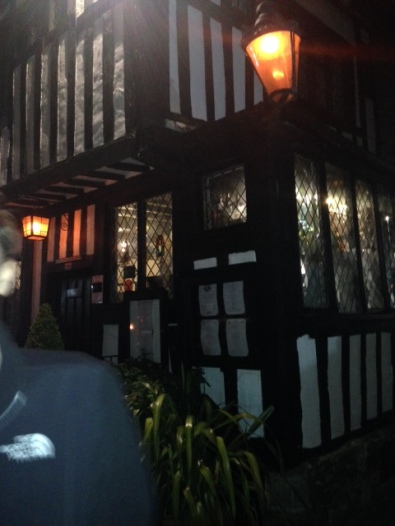 I promise he’s a great kid.

The dinner was amazing and the building was a treasure trove of stories. Here’s a link if you want to learn more – http://www.mermaidinn.com/about-the-hotel/It was a gorgeous night for our 15 minute walk to/from dinner from the VRBO.

The next day we got out the door mid morning and hit the road. We drove toward Hastings and made our way through Eastbourne and up to Beachy Head. 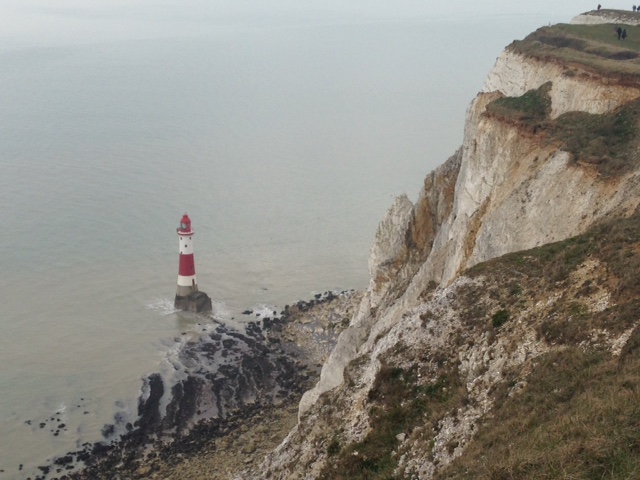 I found this guy on the edge of the cliff. So many questions…did he jump? Was he thrown? Was it a voodoo doll sans pins or a scary looking kids doll? Total mystery, I named him Fred. 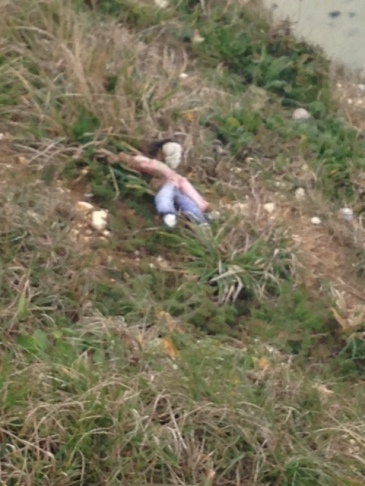 Oh Fred, what have you done?

After a bit we got back in the car and headed to Alfriston, a quaint village about half an hour away. We wandered around Alfriston and decided to have lunch at an ancient pub named The George Inn. (Psst…lots of names include George in this part of the world) I had a great sandwich with brie and bacon (totally healthy). I would caution against the sardines though. My daughter loves the tiny filleted sardines she gets at home, these are not those. The sardines here are much larger and come with the head attached. The plate was passed to my husband who has a stronger stomach and “looked” past the eyes staring back at him. 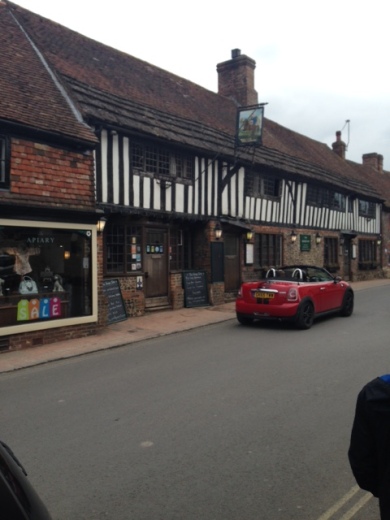 The George Inn – Alfriston, England. A 14th century pub with the uneven floors and walls to prove it. Food was tasty (minus the sardines). Car not included with meal.

While we were there we were greeted by another customer, Molly. Molly is an English cocker spaniel and her name is pronounced Mahl-LAY. She looked liked the photo below, minus the bunny. She was tethered to the table next to us and did us the honor of letting us pet her. She was pretty busy working another table and sat patiently as the dinners took turns feeding her. I fought the urge to steal her.

There were a few shops that we slipped into including this one: 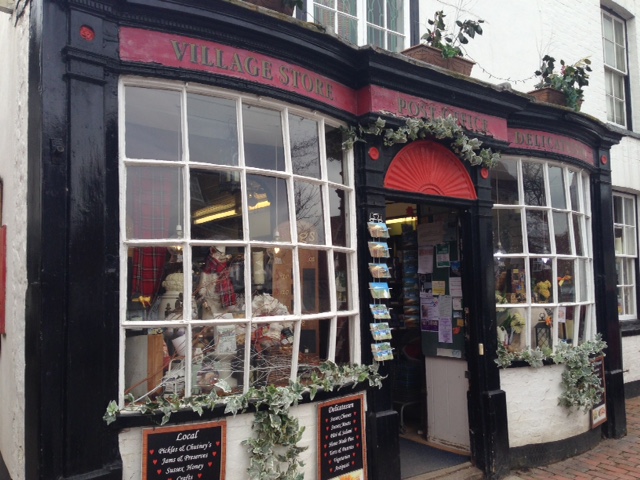 After lunch we made our way back to the car and I found this along the way…no explanation just this in all it’s glory: 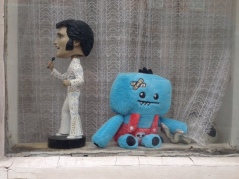 Hey blue eyes, no, you’re not at all creepy…..(quietly backs away)

After a couple of hours in Alfriston we got back in the car. This time we were headed to Brighton Beach. Bear in mind it was off season on a Sunday and we arrived 5pm, not a lot open. Still a fun place to poke around. 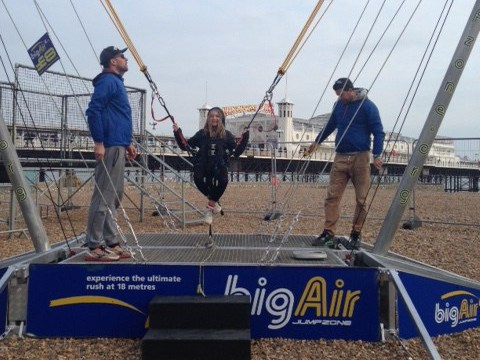 Someone in our party did this “Big Air” bouncing thing…I’m sworn to secrecy on the identity. 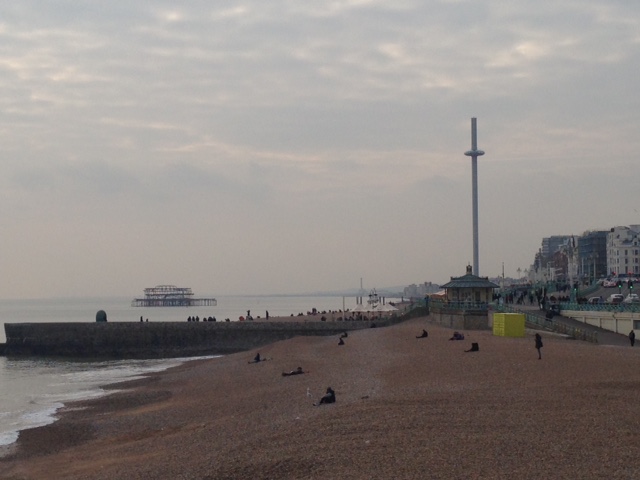 View from the remaining pier at Brighton Beach

The shops were interesting: 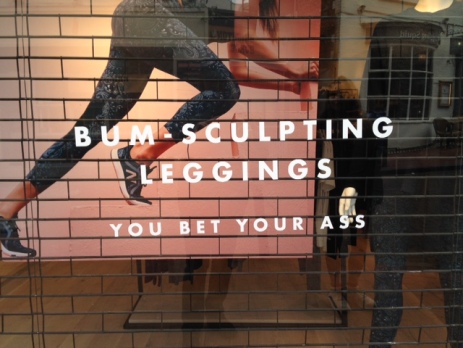 Damn it, I wanted to bet my ass but(t) they were closed.

Of course this WAS open, I stayed strong though. 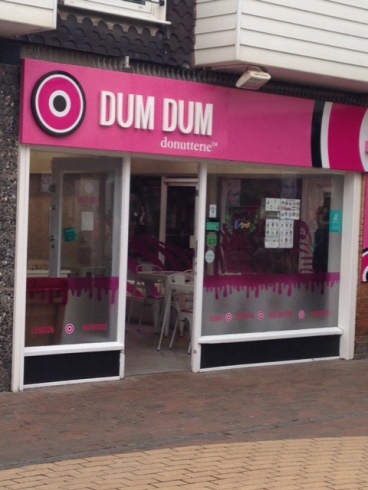 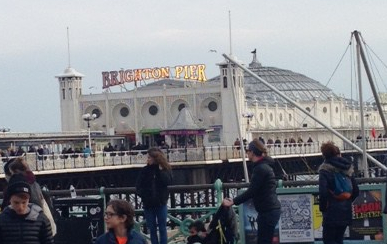 The Brighton Beach and Piers were closed several years during World Was II after the Brighton Blitz. The West Pier has been closed since 1975 and it was left abandoned. It remained a ghostly presence until much of it collapsed into the sea in January of 2003. This is what remains today: 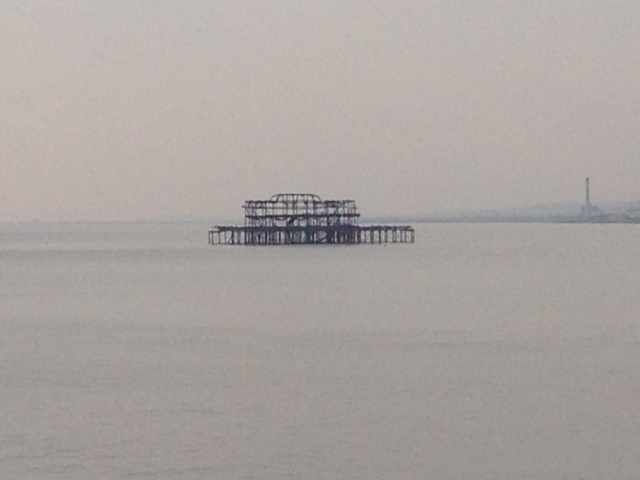 After a couple of hours we were set to cap of a long day of touring at our guide’s favorite pub. Here’s a link with some great photos and menus http://www.yewtree-inn.co.uk/gallery 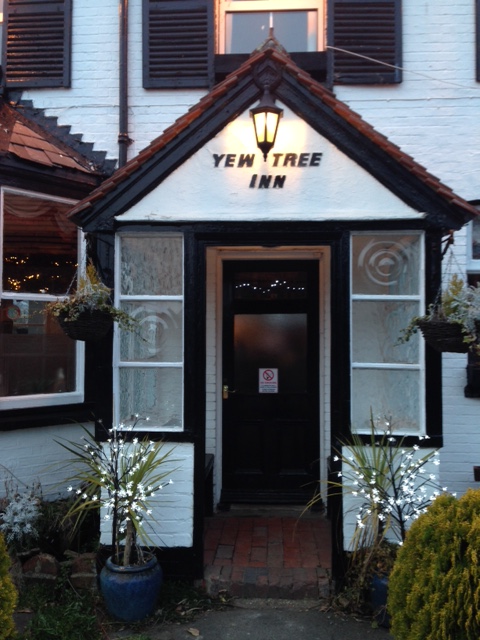 This place exuded casual hospitality like no other we visited. It felt like visiting a friend’s house. The food was perfection.

And thus, we concluded our second day in England.