We just returned from the land of Tesla, Sweaty Betty & Rothy’s, aka, San Francisco. The hubs had a business meeting and the kids had spring break so we turned it into a family vacation. In my former life, I went to Cali on the regular for work, mostly Irvine and Oakland so I squeezed in plenty of LA and SF weekends and Geezus that was like 17 years ago already. (Takes a moment to shake the cobwebs from her mind and contemplate the time space continuum, that was an intense 3 seconds.)

I must confess that I’ve gotten really lazy about planning trips. I used to create schedules, print out maps and have a list of recommended restaurants on the ready. Now I’m like F-it, Google will tell me whatever I need to know in the moment. So maybe Google is making me more zen or maybe it’s just the lazy or her step sister, tired. (insert yawn it feels like 5 am to me, what time zone am I in again?)

The trip starts out in the usual way, complete chaos with undertones of panic, dread and excitement. The timing of the trip meant that we would get in late Saturday evening and host Easter dinner twelve hours after getting home. That meant cooking and cleaning ahead of time (chaos). The panic and dread come from flying alone with my kids (the hubs went out ahead of us). This isn’t new, I’ve been traveling with my kids alone since they were 1 1/2 and 3. They are teenagers now, some things are easier. They can amuse themselves with inflight entertainment on their phones and I don’t need to walk them to the toilet or “assist”. The days of sticker books, toddler snacks and Max & Ruby videos on a continuous loop are long behind us.

I still sit in the center seat to preempt fights over the arm rest and “accidental” elbows to the ribs. Our seats were in row 39 (of 40) for both flights with a round trip dose of screaming babies in row 40. Of course at some point during the flight I envision all three of us dying is a fiery plane crash….or worse, the scenario where I get sucked out through the disgusting excuse of an airline toilet, plummeting to my untimely death with my pants around my ankles, kids watching in horror from an airplane window as they shove at each other to get a better view…..part of me is at peace as I speed to the permanent sleep, knowing I won’t have to referee anymore of those fights.

All kinds of awful scenarios go through my mind, I suddenly have the imagination of Stephen King. I glance at the horrors of my own making, then I  crumple them up and toss them into a mental trashcan until the next flight when I’ll pluck them out and unfurl them again…like some dreadful relative that stalks the periphery of your life. Wow, that went dark for a hot second, moving on.

We stayed at a really cool place, the Inn at the Presidio built in 1903, it has been repurposed from it’s original use as housing for unmarried officers. We were fortunate to get one of only 22 suites in the main building. The amenities included continental breakfast and daily happy hour with wine and cheese (& OMFG good chocolate chip cookies). The inn is located within a park, truly an oasis within San Francisco. Once you’re tucked in for the night, you forget that there is a bustling city within a 10 minute walk. We would have forgotten we were in SF all together if not for the distant fog horn gently reminding us throughout the night. It was glorious.

Since I’m married to a nerd, he scheduled a tour of the Tesla factory. Knowing my daughter would roll her eyes so hard that they would actually exit her body during the tour, we opted out. So the boys went to Fremont and the girls walked over the Golden Gate Bridge and into Sausalito.

We had a beautiful sunny day which is not a given in SF. Parts of the walk were daunting….OK, scary as hell. The bridge was fine, loud but safe, the descent into Sausalito, not so much. When you get over the bridge, you shadow the freeway traffic until the exit for Alexander Avenue. Once you get on that road, walkers are on a narrow shoulder getting buzzed by a swarm of bicyclists with varying degrees of skill (or lack thereof).

I find it amazing that a city will rent out so many bicycles to people who clearly have no idea WTF they are doing. The bike shops give them a map, a pat on the head and wish them well in one of the most heavily trafficked areas in the USA which by the way, has a tendency to be shrouded in fog. What could possibly go wrong? We were thrilled and grateful when we made it to the sidewalk in Sausalito which posed signs forbidding bicycles. No bicycles on the sidewalks, thank you!

Sausalito is gorgeous. It is a quaint town overlooking Richardson Bay and the Golden Strait which, fun fact, is why that famous International Orange colored bridge is called the Golden Gate Bridge. Back to Sausalito, it’s expensive as hell. The median house price hovers around $1.4m which honestly seems low for the area. That calculation includes a cluster of houseboats which are interesting on their own.

My daughter and I got lunch – I ordered an $18. cheeseburger and she ordered from the kid’s menu (under duress) and we switched meals. Let me tell you the kid’s fillet of sole was delicious (I sounded like a cannibal when I read that out loud). After lunch we went out in search of socks because my daughter wasn’t wearing any with her Converse and at about mile 7 that was getting annoying. She picked out a pair that featured the GGB and screamed tourist with flair. A couple of hours in we were ready to take the ferry back to San Francisco.

While waiting for the ferry I decided to sit on a bench next to a heavily bearded man and his little dog too (I really hope you read that last bit like the Wicked Witch of West). At first he just seemed like an eccentric street performer. He started teasing his dog who was having a cookie and wasn’t willing to share. Then he picked the dog up and they had a full on shouting match. After a few minutes he started saying disparaging things about his ex-wife and her parents which prompted us to leave and get in the ferry line half an hour early. 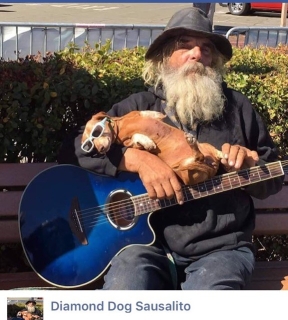 My daughter and I found seats on the ferry and I left to get us water and a snack. My parting words were “save me a seat honey”. I got back 10 minutes later and all three seats were taken. I asked my daughter what happened, assuming she just forgot about me, she had a slightly panicked look on her face. I hovered close by. When the person in the aisle seat moved I took that seat leaving one person between my daughter and I, we will refer to her as Typhoid Mary. Actually she probably had the flu or a bad cold, there was a lot of coughing and nose blowing. TM did not appear to speak or understand English so a seat exchange wasn’t in the making. After several persistent coughs followed up with some serious nasal discharge, I decided to move. I got up and aired myself out. My daughter stayed in her seat and amused herself with her phone seemingly unaware of the cootie circus happening within her orbit.

When the ferry was getting ready to dock I came back to check on my daughter and encourage her to exit so we could get ahead of the 80 bicyclists that would also disembark. I got more panicked looks with some rapid hand movement and overly expressive eyebrows….not a lot was said. She’s half Italian so she’s pretty good with the hand signals. I got the gist of it, she wasn’t leaving early.

Eventually Typhoid Mary got up and exited the row. That’s when I saw my daughter’s beloved Panic at the Disco beanie sitting in the sit that TM just exited. She sacrificed the beanie to save me a seat. The interesting bit is that the beanie had a small glass bottle filled with erasers in it which, didn’t seem to bother our recently departed friend. Also, my daughter mentioned that she plucked a bug off her own eye in transit letting out a muffled scream that I missed. I was either in the beverage line or gazing at Alcatraz as we went by.

So we left the ferry with all of our items and a bag of unopened pretzels that were no longer wanted. San Francisco has a big homeless population so I suggested that we give the pretzels away to someone who might be hungry. The first homeless person we encountered resembled the giant from the Game of Thrones during the Battle of the Bastards. 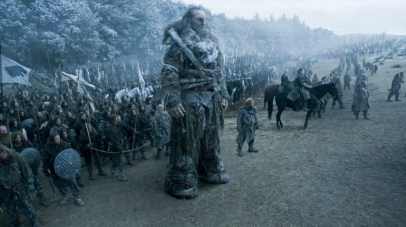 Seriously the dude was maybe 4 inches shorter than the giant and vomited into a garbage can in front of us. We decided to keep the pretzels a little longer.

A few minutes later we passed by a bench that had a shopping cart next to it filled with blankets and random items. I suggested we see if that person wanted the pretzels. I approached with my daughter next to me. He was a big guy (smaller than the giant) with the largest nose ring I have ever seen. I asked him if he wanted the pretzels and he snatched them out of my hand with a grunt. We didn’t stick around for idle chatter or philosophical conversations.

At this point we were making our way to Pier 39 at Fisherman’s Wharf aka, the biggest tourist trap in San Francisco. I didn’t mind my girl wanted to visit the sea lions. At this point my cell phone was under 20% so I turned it off to conserve energy. The plan was to take an Uber back to the inn once we finished at the pier. We were about 11.5 miles into our day at this point.

While we were walking on the pier my daughter mentioned that she would like to get some more sassy socks and *poof* behold a sock store appeared. We got lost in there for half an hour and left with two pairs of socks and an idea of where the sea lions hang out. Ten minutes later, satiated with our sea lion viewing, we were ready to go back.

As I was opening the Uber app, my phone died. Totally dead, barely a warning just snapping a photo of a sea lion one minute and fade to black the next. Fortunately there were taxi cabs at curbside so we pretended it was 2008 (before Uber ruled the roadways) and went back to our room. It was a fun day and I hope my daughter will reflect on it with the same fondness I will….so maybe, I left a wee bit of my heart there…in San Francisco.