I recently took a group of teenage girls out for pizza and an escape room experience. The outing was to celebrate my daughter’s birthday. She’s had to deal with some adversity this past year – the deaths of two grandfathers, a falling out of previously close friends and the hormonal angst of being female in an adolescent body. Eight grade is out to destroy everyone and no one gets out unscathed. I try not to fret about it too much. I constantly remind myself that grit doesn’t grow on a sunny beach, it grows in a dark, lonely, painful place.

I started to have anxiety about her birthday in the wee hours before dawn. Somewhere around 3am my brain decided to obsessively worry if someone would decorate her locker at school. I realize what a luxury problem that is, I was raised by an alcoholic mother and had a deadbeat dad, a decorated locker wasn’t in my orbit in middle school. First world problems be damned, my mind just wouldn’t let it go.

My daughter and I have made at least a dozen trips to the local drugstore to purchase candy and decorations for various girls in her grade. My girl makes a point to celebrate everyone’s birthday. She even decorates for half birthdays for the friends that have summer birthdays when school is closed. She’s logged significant hours on this little project and I was concerned that she might get forgotten since she is usually the organizer. Like the mom who bakes her own birthday cake because no one else will, for the record I haven’t done that but I know women that do. I have purchased flowers to cheer myself and have made my own chicken soup when I got sick. It’s empowering to take care of yourself. Decorating your own locker would just be weird. I did hand over a king size candy bar in the morning and noted that I would have attached them to her locker if that was allowed. I got some serious eye roll for my troubles.

I worried for nothing, her friends showed some big love. My daughter came home with Halloween-level bags of candy – Kisses, M & Ms, Reese’s, Kit Kats – it was Candy Palooza! They put streamers on the row of lockers which flanked hers, there were balloons, pictures, memes, there may have been a parade, it was magical! The only bummer was one of her closest friends couldn’t make the event due to a weekend away which could not be rescheduled.

Driving your kids and their friends around is the best way to learn about them. I try to keep my mouth shut and just listen, not my first inclination. My daughter likes EMO (for the old people, that is a genre of rock music which leans heavy into emotional expression and yes I had to Google it ’cause I’m old too). Her choices were vetoed and they started playing songs from Seussical.

Horton Hears A Who

I tried not to laugh excessively as the theater nerds in the car sang their hearts out while my daughter had a FFS look on her face. It was priceless. Before you could say “Break a leg!” we were parked and headed in for pizza. I got them all pizza and seated myself at a table for two on the opposite end of the room. Shortly after I was settled in, I got a text from my daughter “love you momma”. Ahhh, I replied with the usual emoji’s – kissy face and double hearts. A few minutes later I got another text – That was Xxxxx. Punk got me, I may have yelled “You Suck!” from across the pizza dinning room, maybe.

An hour later we were on our way down the block to go to an escape room. My daughter picked out the scariest possible scenario because that’s who she is. One friend was petrified so I opted to stay with her and watch the remaining girls try to think their way out of the room via a monitor.

This room included a prisoner who was supposed to be foreboding instead he was a cornucopia of clues and helpful hints. “No, not that key”, “Turn it the other way”, “Listen to the tape again”…..this man was desperate for these girls to “escape” so he could move on with his own life. One of the clues required that a Nerf dart gun be used to hit a specific target. My daughter was so bad at this that the inmate was actually handing her the darts to improve her odds. Imagine Hannibal Lector trying to assist six teenage girls with a task for 50 minutes when everyone is taking turns giggling and screaming “shut up” at each other. I’m sure he was ready for some Chianti by the time we finished. They got out in 53 minutes and that man earned every penny of his pay.

What he wanted to say: Oh FFS girls, look under the compass. The compass, it’s circular has a glass dome top with N, E, W, S inscribed…..I’m guessing none of you were ever in the Girl Scouts. No I don’t want a smoky eye tutorial. Are you even paying attention?

I drove all the girls home and later that night I went to my daughter’s bedroom. She had a great birthday and she loved her presents – mostly nods to Panic at the Disco and My Chemical Romance, her two favorite bands. One friend included some sarcastic buttons in the gift mix. This is my favorite – 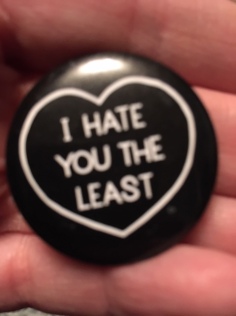 I happen to be good friends with the mother of the girl who gifted this to my daughter. She gets our humor.

So while I can pat myself on the back for a successful outing I must also call myself out for a gift faux pas. In my haste to purchase EMO ‘merch’ (that’s short for merchandise, or so I’ve been told via audible eye roll)…I purchased a sweatshirt that is wildly inappropriate. I’ve given in on the excessively ripped jeans fad however, my daughter will not be wearing her new MCR sweatshirt to school. It has this on the front:

Not really sure how I missed the gun border on this. My eyes aren’t what they used to be and it was one of those late night Amazon purchases. We all have to live with those regrets from time to time…of course it wasn’t Prime, that would be too easy. So once again a parental victory is leveled by a parental fail and isn’t that the way.